We are working with a very early Alpha release some a few warts are to be expected, but we wanted to show you a few of the exciting new features of v24. Over the next few weeks we will try to show a few of the new items that we think are the most interesting. Andy already went live on our Facebook group showing some WinDev stuff, so if you haven’t seen that be sure to check it out.

One of the most exciting new features for me is the inclusion of WebDev in the WinDev IDE! With v23 we saw WinDev Mobile become enabled within the WinDev IDE, and now we are seeing the same thing with WebDev in V24.

I have been a huge proponent of using one project for WinDev and WebDev for a longtime. If you have heard me talk about it, or seem my demos, then you really need to come out of the cave a bit more often!

This approach allows me to have one Analysis, and share reports, classes, procedures etc. between different configurations of my project. I have projects that produce 2 different windows exes, 3 different WedDev Sites, a couple of windows services, and a set of RESTful web services all from the same project file! Maintain the common code between all of that if they were separate projects would be a nightmare!

Well not any longer!!! Now I can stay in WinDev the entire time, and edit my WebDev pages etc. Note: Before you get to excited, yes you still need a WebDev license!

Along with this great advancement, PCSOFT has also done quite a bit of work on the ability to convert between Windows and Web. There has been some rudimentary conversion tools for a few releases, but v24 makes a quantum leap in this area.

There is now a migration wizard to will convert your entire WinDev application to a WebDev site. We will be taking a closer look at that in a few minutes, there are also 1 click Window to Page transformation features, Window Template to Page Template translation features, and even the ability to copy and paste a control from a window to a page and have it translated to a WebDev control with all the appropriate settings.

Anyone that knows me, knows I have serious reservations about taking a windows application and doing a straight conversion to WebDev, but that is for another conversation. Having the ability is still great, whether you use it for small internal projects, a learning tool, a starting point for customizing the Web version, or if you are going to do a straight conversion and publish to the masses (but no seriously don’t do that please!)

To play with this feature a bit this AM, I created a simple project with two related tables: Product and ProductType. I then used the RAD Simple pattern to generate a simple WinDev application (Again nothing I would do for production!!!). This created a simple windows program that functions fine, not the prettiest application but great for a simple internal project that you just need to get done.

We got a Main Menu

Browses for each table. (Products shows below)

And Forms. Notice that the Product Type lookup is even done as a combo box, with a link to its form on the Product Form shown below.

So whats it going to take to create a Web version of this project? Well not much with v24!

First we create a new configuration

And as promised even though we are in the WinDev, Site is one of the configuration options! 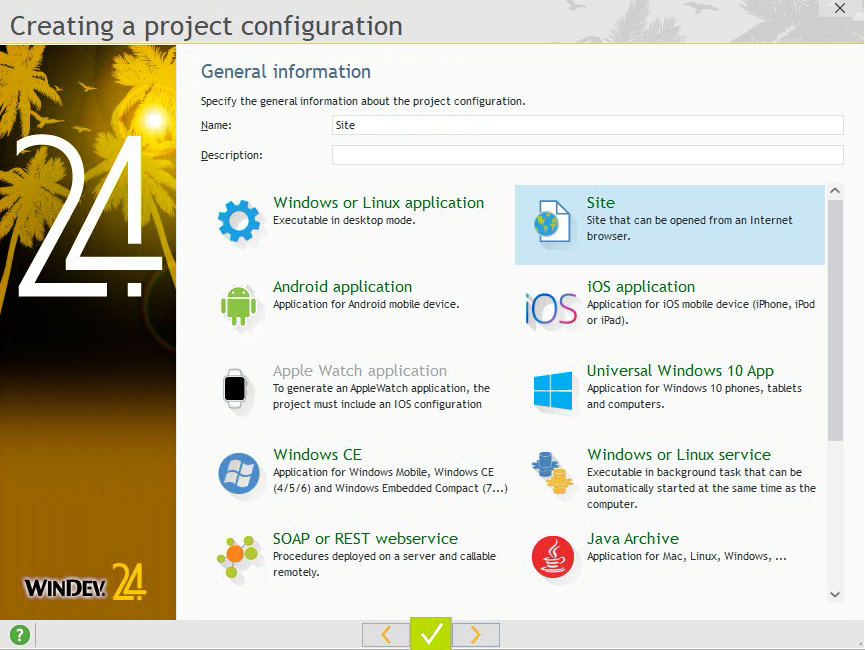 And after a few questions about what type of site, I choose Wedev Session (Classic), which is what they are now calling WebDev Dynamic, things really get interesting, it ask which windows we want to convert.

I chose all of them. After a few more general project creation/SCM screens. You get to a Project Audit for Page Conversion screen, that shows you possible issues with the conversion.

The first one is that all of our open statements, which by the way is a new addition to WebDev, are referencing the names of the windows, instead of the page names, a simple click on Replace all, fixes that!

The next issue is talking about some code that enables edit in place in windows. We will just ignore that for now.

And the final issues is talking about the command Abandonne(), this appears to be one of the warts of a early alpha release, some of the commands are being generated in french and confusing the audit. I double clicked on the errors, which took me to the code, and changed it to Close(), another new addition to the WebDev language. 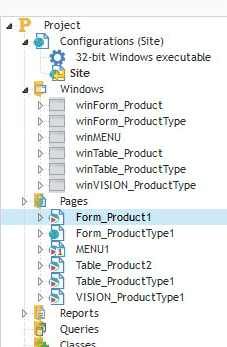 And if I press the “GO” button it launches a test of the website. BTW, another great feature of V24, you no longer need to configure a Web Server (IIS/Apache) on your development machine for testing WebDev sites, its now built!

And we have a functional, although ugly website. But then we should expect much since the original windows app wasn’t going to win any UX contest in the first place! 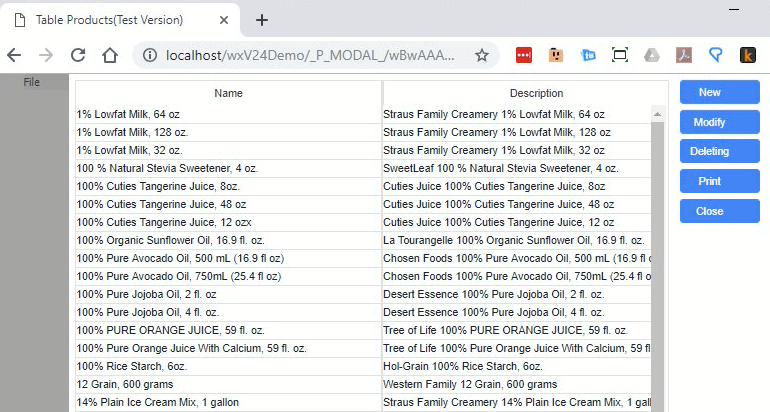 And the product form.

Spend a little time on styles, zoning, templates, etc. and I am sure you could make this a presentable site easily.

Bottom line: Although I will never be gunhoe to do wholesale conversion of my windows projects to WebDev, this new features of v24 will definitely make it that much easier to develop hybrid projects that have both Windows and Web portions, which is a large percentage of our projects these days. The gain in productivity of being able to do everything from within one IDE will save me a considerable amount of time on a daily basis, and that is time I can spend doing “REAL” work!

In the next post, I will take a look at a few new native controls that have been added to WebDev. I am real excited about these, as most of them replace hard fought jQuery implementation that I have done in v23!

BTW, I will be doing a Facebook Live presentation of this article later today, so be sure to join the group so you don’t miss out.